How to Sponsor a Manga Library at an Anime Con 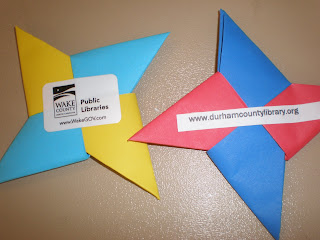 Animazement is a large anime/manga con that is held each year in the Raleigh area. Last year, the Wake County Libraries had an outreach table where we advertised what the libraries had to offer for anime fans.

This year, Animazement contacted us in early spring to ask if we wanted to sponsor their first ever manga library. Of course, we said yes. This was a great opportunity to continue our outreach to this crowd. As an extra bonus, the con had moved to the Raleigh Convention Center, providing more space for the activities.

We received our own room that we could keep locked during the con, which eliminated the need to transport materials around each day.’  We just had to set up once and tear down once.’  The room they gave us was absolutely beautiful. We were in a corner room on the main floor. The room had two walls of windows, offering lots of light and a great view of the brightly dressed crowd. There were also tables with chairs and lots of lounge furniture. 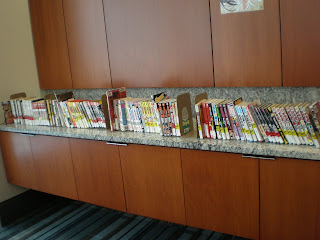 Since we were not contacted until January, we only had six months to gather manga together. Our library contained advanced reader copies from publishers, gift copies from patrons, and old library copies that were falling apart but that weren’t too yucky. We also had some miscellaneous magazines and appropriate non-fiction, such as how to draw manga. All told, we had 120 volumes of manga and about 25 magazines. 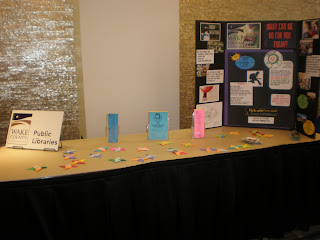 We also had a table for pimping library stuff: bookmarks of manga series we own, locations of our libraries, Wake County-branded shuriken (ninja stars), and flyers about our upcoming Camicon, a one day manga convention that will be held at the Cameron Village Library.

We weren’t sure what type of crowds to expect. Would anyone want to come into a manga library when they could walk around and see all of the goings on in the main floor? Luckily, we had a steady stream of guests enter the room– an average of 25 people each hour. 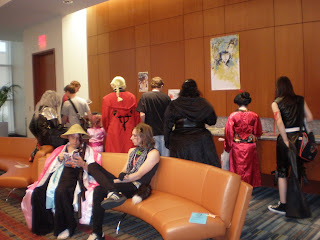 The response was overwhelmingly positive. Many said that it was a nice calm place to go when you needed a break. Others liked that they could sit with their friends. There weren’t a lot of places at the convention where folks could just sit at a table and chill for a bit.

I was curious if the manga would walk off. When we first started learning about what a manga library would look like, others suggested that we have people turn in their badge to look at a volume of manga or that we might need to search the bags to make sure no manga walked off. We finally decided to just ask folks to leave their bags at the door and see how that went. We didn’t say this verbally; we just placed a sign at the door. Most did not read the sign, although a few did. But I kept an eye on people and everyone was good about leaving the manga in the room. Once we get back to work, we can compare the manga left to our inventory and see if anything was taken. I highly doubt it. It’s nice to know that you can trust people.

All in all, this couldn’t have gone better. It was easy to do. It did take some work for me to organize. I had to get volunteers to staff the booth and make a lot of contact with the people in charge. I negotiated to get free badges for my volunteers. There were questions about how to set up the room, so I had to take a tour on my personal time to see what the room looked like. I also asked registration if I could pick up all the badges so that my volunteers didn’t have to stay in line. The most nerve-racking thing was not knowing what to expect. And now that I do, next year will be that much easier to plan. If you have a local con, find out if you can sponsor a manga library. It’s a great outreach, and the fans will appreciate it.

I am a teen librarian who has worked in the Wake County Library system for six years now. I have been in YALSA for 3 years now and currently serve on the YA Galley Committee. I received my MLS at UNC-Chapel Hill in 2001. My specialties include book clubs, teen advisory boards, programming, and blogging.

View all posts by Lindsey Dunn →