In 2015 the Federal Communications Commission (FCC), after an outpouring of support from the public, put in place strict regulations to make sure  internet service providers (ISPs) could not do things like create fast lanes, or “throttle” online traffic.  They preserved an open internet where all traffic is treated equally online and where large corporations did not get preferential treatment over individuals or small institutions, like libraries or schools.  The American Library Association (ALA) has long been a supporter of net neutrality–keeping the Internet open and free to everyone–and has issued several statements on the topic.  Net neutrality aligns closely with libraries’ core value of providing free and open access to information for everyone.  You can learn more and keep up to date on developments from their District Dispatch blog.  This week, the Trump administration proposed rolling back those regulations with an ironically named “Restoring Internet Freedom” proposal, and they are now accepting public comments about the proposal.  END_OF_DOCUMENT_TOKEN_TO_BE_REPLACED 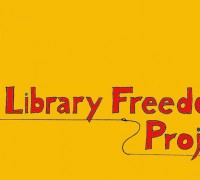 Last week, my library science department hosted Alison Macrina, the founder and director of The Library Freedom Project (LFP). From their website:

The Library Freedom Project is a partnership among librarians, technologists, attorneys, and privacy advocates which aims to make real the promise of intellectual freedom in libraries. By teaching librarians about surveillance threats, privacy rights and responsibilities, and digital tools to stop surveillance, we hope to create a privacy-centric paradigm shift in libraries and the local communities they serve.

Alison’s three-hour workshop went by so fast, probably because she is an engaging speaker and the things she talked about were interesting. There is so much to know and learn about digital privacy…especially as librarians. We are in a critical position to help spread this information to the communities we serve. Alison herself is a librarian/has a librarian background so she definitely sees our potential in helping to protect intellectual freedom in these spaces. She is so about librarians, the LFP even has a toolkit all for us!

END_OF_DOCUMENT_TOKEN_TO_BE_REPLACED

Congratulations! You’ve almost made it through February. If you’re struggling to find ideas for programs or just want to know what’s out there in the research world, maybe this will help.

28 Days of Teens and Tech #27: The Larger Social Effect of the Internet

This month we’ve seen a lot of interesting talk about different technologies and how they affect teens here at the YALSA blog. Now that we’re wrapping things up, I thought it might be interesting to pull back a little and look at the larger social effect of the Internet on society. There are two reports by the Pew Internet & American Life Project in particular that can tell us how the Internet has changed our social lives.
END_OF_DOCUMENT_TOKEN_TO_BE_REPLACED

HB 1727- Mandatory Internet Filters on all Public and School Libraries

“Almost 40 countries will participate in the fourth edition of Safer Internet Day (SID) which this year takes place on 6 February. The highlight of the day will once again be a worldwide blogathon, which will reach Australia on 6th February and progress westward through the day to finish up in the USA and Canada. Following the huge success encountered in 2006, this year’s blogathon goes one step further to include the voices of hundreds of youngsters. In the framework of a competition launched in October 2006, more than 200 schools in 25 countries across the globe have been working in pairs, using technology to cross geographical borders, to create internet safety awareness material on one of three themes: e-privacy, netiquette, and power of image. On Safer Internet Day, all of the projects they have produced will be uploaded to the blogathon.”

The online community of Habbo also issued a press release on how they are designating February as Teen Online Safety Awareness Month with Teen Magazine and Teenmag.com supporting the effort.

Sorry I didn’t catch this earlier. Maybe even some ideas for using social networking with libraries as well regarding TTW, DOPA, or other issues.